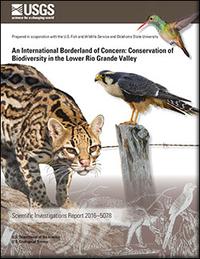 The Lower Rio Grande Valley (LRGV) of southern Texas is located on the United States-Mexico borderland and represents a 240-kilometer (150-mile) linear stretch that ends at the Gulf of Mexico. The LRGV represents a unique transition between temperate and tropical conditions and, as such, sustains an exceptionally high diversity of plants and animals—some of them found in few, or no other, places in the United States. Examples include Leopardus pardalis albescens (northern ocelot) and Falco femoralis septentrionalis (northern aplomado falcon)—both endangered in the United States and emblematic of the LRGV. The U.S. Fish and Wildlife Service (USFWS) manages three national wildlife refuges (Santa Ana, Lower Rio Grande Valley, and Laguna Atascosa) that together make up the South Texas Refuge Complex, which actively conserves biodiversity in about 76,006 hectares (187,815.5 acres) of native riparian and upland habitats in the LRGV. These diminished habitats harbor many rare, threatened, and endangered species.

Summary: In this article we review the literature, with a focus on cacti, about the role of cultivation in conservation. We examine in detail the case study of Lophophora williamsii, the peyote cactus, and present arguments that cultivation is not only a necessary conservation strategy for this particular species but is likely the only viable alternative for long-term survival of this cactus in the wild. Concerns about cultivation, as well as recommendations and conservation implications are also discussed.

The progress toward and impediments to legally protected cultivation of Lophophora williamsii, commonly known as peyote, are elucidated. Recent increases in the ceremonial and medicinal consumption of peyote are inferred from published data and personal observations of the authors. The conservation-based rationale for peyote cultivation is that the predictable shift in the primary mode of production from the current unsustainable harvesting of wild peyote in habitat to regulated cultivation of peyote, either in situ or under glass, would provide alternative supplies of peyote for current and future use by the Native American Church. Such a change in the principal peyote production system from wildharvesting to cultivation would logically reduce the harvesting pressure on the peyote populations that survive the intense overharvesting inherent in the present system. We summarize current and evolving aspects of the regulatory environment and emerging perceptions regarding the need for U.S. federal regulations that would provide legal certainty for individuals involved in the adoption of cultivation of culturally acceptable peyote on an economically viable commercial scale